Manchester is steeped in football history. From the formation of the first league in the world in 1888, to the home of the National Football Museum in 2012 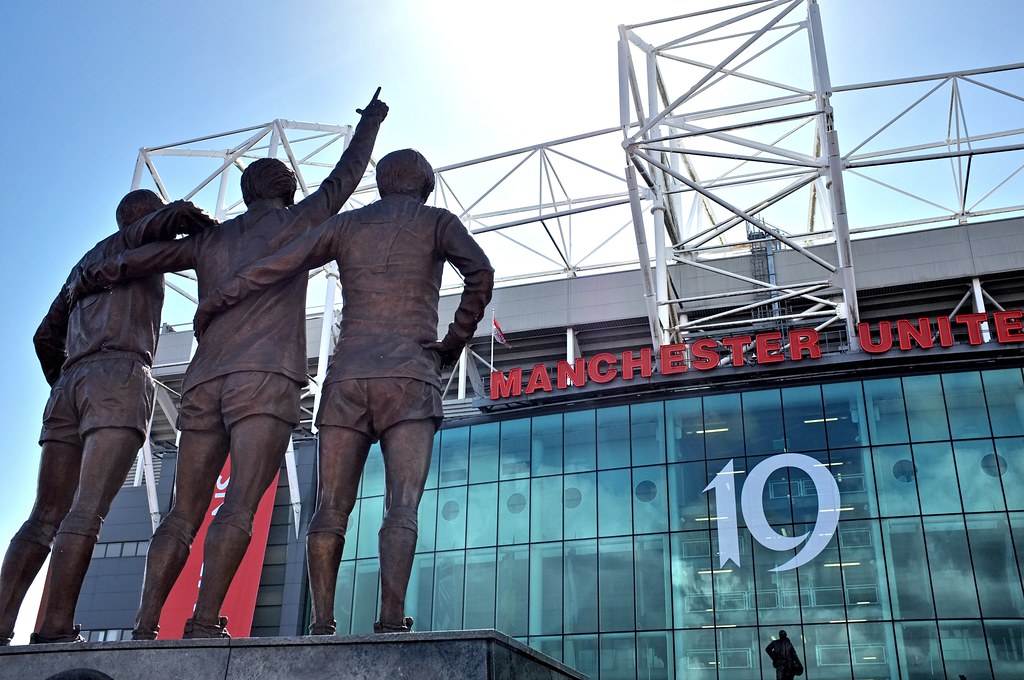 It’s no secret that Mancunian’s are passionate about football, whether they’re a supporter of the red or the blues. It’s one of the main things that attracts visitors to the city, where they can visit the homes of both Manchester City and Manchester United.

Here at Manchester Taxi Tours, we offer bespoke Manchester United Tours, and Manchester City Tours, in which we explore all aspects of each clubs careers, and follow their footsteps around the city.

Our Manchester United Tour takes it right back to where the club was formed, in Newton Heath…

The club was formed in 1878 as Newton Heath LYR Football Club, and trained at North Road, around 6 miles away from their current home at Old Trafford. North Road no longer exists as a football stadium and cricket field, and is instead home to the Fujitsu offices in the North Manchester Business Park, on the renamed Northampton Road. Back in the 1800’s, North Road’s highest capacity was reached at just 15,000. Compared to the 75,643 that Old Trafford has the ability to hold now, really shows just how much the club has progressed.

During the tour, we can visit the old site of North Road, although there’s little left to show it’s existence. Whilst in Newton Heath, our tour takes us to Duncan Edwards Court, otherwise known as the “Busby Babes” Housing Estate. It is part of a close-knit network of streets, named after the eight Manchester United players – Roger Byrne, Eddie Colman, Mark Jones, Duncan Edwards, Billy Whelan, Tommy Taylor, David Pegg and Geoff Bent – who tragically died in the 1958 Munich air disaster. Visiting the Footballers’ estate really gives you a sense of the legacy they left behind after the tragedy, and the team that changed forever.

There’s also the opportunity to visit the final resting place of Sir Matt Busby, one of the greatest football managers of all time, who was laid to rest in Southern Cemetery, Manchester after his battle with cancer came to an end in 1994.

Before we get to see the impressive build that is Old Trafford, we can take a stop at Manchester United’s second home ground, Bank Street. The team used the ground for football matches and training after their departure from North Road, back when they were known as Newton Heath Football Club. The team benefited from a larger capacity (50,000) for a short while, but left in 1910 to relocate to an even larger premises. The ground is no longer still standing, after the main stand blew down in a storm and it was later demolished. Although the site is now only the car park of the Manchester Velodrome, we can visit the legendary plaque which sits on a house wall in Bank Street, remembering the former ground.

Yet another trip down memory lane on the tour for any Manchester United lover, is a visit to the Cliff, where the team spent their time training for football matches until 1999. Still to this day, the ground is used to host some Manchester United Academy matches, but the first team moved on to Trafford Training Centre in Carrington back in 2000. Their impressive new training centre saw a substantial £60 million renovation, including a state-of-the-art medical & sports science department, with an on-site hospital.

With visits to Newton Heath, Salford and Clayton to all of the venues mentioned above, you’d think that the exploration of Manchester United’s history had come to an end, but it’s far from over.

Although we’ve covered the most key places on any Manchester United tour, there’s still plenty more to see where the reds are concerned, including their displays inside the world’s biggest football museum.

The National Football Museum is located in the Urbis building in Manchester city centre, and houses an unimaginable amount of football memorabilia from teams all over the world, including Manchester United. For any football fan, the Museum is something that can’t be missed out on a visit to Manchester. The National Football Museum is almost a treasure chest for Manchester United memorabilia, and holds all sorts from George Best’s 1970 United shirt, to George Stacey’s 1909 FA Cup final shirt and a Wayne Rooney portrait. Of course, there’s the option to buy the standard souvenir-type mugs and cufflinks at the end – whatever takes your fancy…

For something a bit different on the Manchester United tour, there’s also the opportunity to take a trip to some of the popular Manchester places that United players have put their stamp on. For example, Rio Ferdinand’s luxury Italian restaurant Rosso, known as one of the city’s biggest celeb haunts. There’s also the area in Sale where George Best once opened his own fashion boutique, and two Manchester nightclubs – Oscar’s and Slack Alice’s (now known as 42nd Street Nightclub).

Now, on to the main event… a visit to Old Trafford itself – or, the “Theatre of Dreams” as we like to call it. It stands as the second largest football stadium in the UK, with a huge capacity of 75,635. It’s an impressive build, and has been the home of Manchester United since 1910. Over the past century, the ground has hosted games in the 1996 World Cup, Euro ’96, the Champions League final in 2003 and many more notable matches, including those in the 2012 Summer Olympics. From the earlier days of Matt Busby, Bobby Charlton and George Best to the more recent achievements of Sir Alex Ferguson and the class of ‘92, Old Trafford is soaked in a rich history of football glory. For those who want to get closer and experience the stadium from the player’s’ point of view, a ‘Theatre of Dreams’ stadium tour should be on the cards, not only getting you into the home dressing room, but also into United’s museum, to witness the greatest football story ever told.

To build your very own Manchester United Tour with us, get in touch now.