Arguably, Manchester is the home of football in the UK, and this summer will see things reach new levels of excitement. Over in France, we’ll be cheering on the three lions as the UEFA Euro 2016 tournament takes place, while here in Manchester, both the blue and red sides have plenty to be looking forward to.

Both teams welcome new managers, in the form of two of the world’s biggest footballing names. Pep Guardiola makes the move from Bayern Munich to Manchester City, while José Mourinho returns to the Premier League after some time out. Some of Europe’s finest footballing talent also looks set to arrive in Manchester, with players such as Zlatan Ibrahimovic, Paul Pogba, Aymeric Laporte and Pierre-Emerick Aubameyang all linked with moves to the respective clubs. Already, Manchester City has completed a deal for former Borussia Dortmund man Ilkay Gundogan, while Mourinho has made Eric Bailly the first signing in Manchester United’s exciting new era. 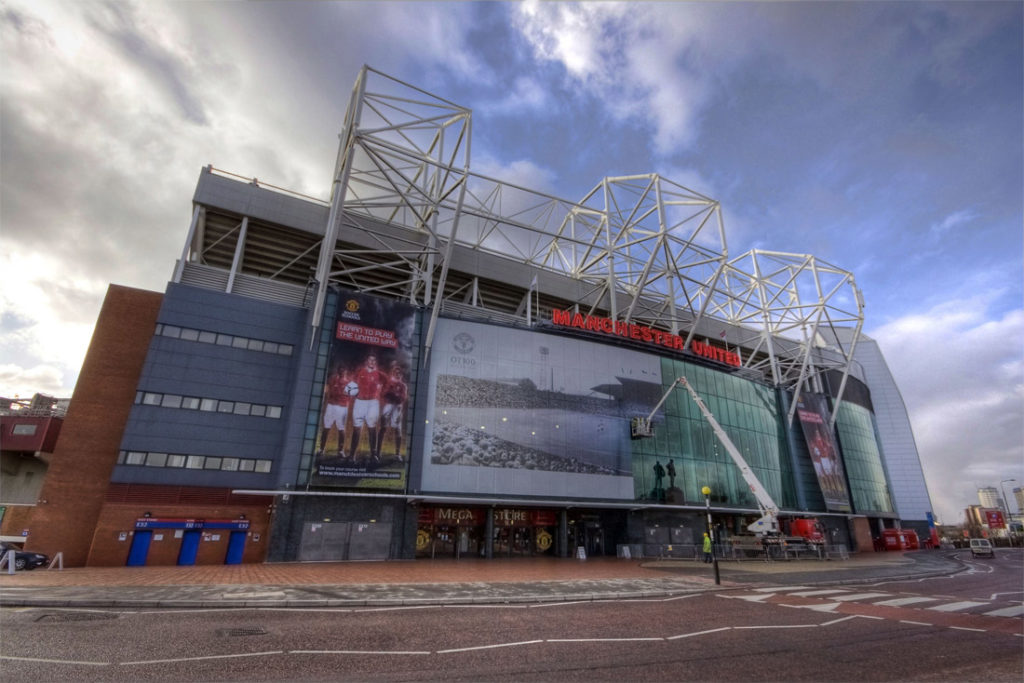 Whether you’re a Manchester United supporter or not, the “Theatre of Dreams” is a must visit for anyone taking a trip to Manchester. It stands as the second largest football stadium in the UK, with a huge capacity of 75,635. It’s an impressive build, and has been the home of Manchester United since 1910. Over the past century, the ground has hosted games in the 1996 World Cup, Euro 96, the Champions League final in 2003 and many more notable matches, including those in the 2012 Summer Olympics. From the earlier days of Matt Busby, Bobby Charlton and George Best to the more recent achievements of Sir Alex Ferguson and the class of ‘92, Old Trafford is soaked in a rich history of football glory. For those who want to get closer and experience the stadium from the player’s’ point of view, a ‘Theatre of Dreams’ stadium tour should be on the cards, not only getting you into the home dressing room, but also into United’s museum, to witness the greatest football story ever told.

Formerly the pinnacle of Manchester’s 2002 Commonwealth Games, the expanded Etihad Stadium now has a capacity of over 55,000, and will soon be the home of Pep Guardiola, who is set to launch Manchester City into a highly anticipated new era of success. The stadium has been party to two Premier League title wins, one of which was won in remarkable, memorable circumstances, and in the past thirteen years has seen the club go from mid-table success with managers such as Kevin Keegan, Sven-Goran Eriksson and Stuart Pearce, to domestic honours and European progression under Roberto Mancini and Manuel Pellegrini. The stadium offers behind the scenes tours, allowing fans to get to grips with the club’s history in the exhibition area, and experience the atmosphere in the home dressing room and players tunnel. 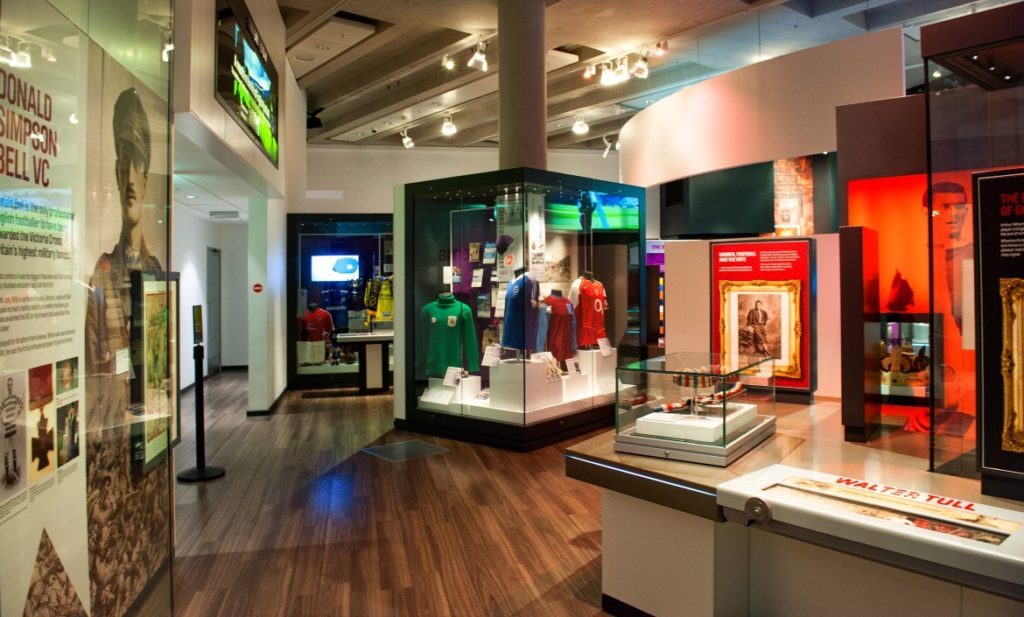 It doesn’t matter whether you’re a red or a blue here, because all football lovers can appreciate the displays inside the world’s biggest football museum, located in the Urbis building based in Manchester city centre. The six storey museum is jam-packed with information about the history of the game, the players, and even a floor dedicated to interactive games where you can test out your own skills. It houses some of the most valuable pieces of football history, including the Jules Rimet World Cup Trophy of 1966, and 1930’s World Cup match ball. Fully equipped with a cafe for refreshments, exploring the museum is a memorable day out for all of the family, where you can expect to be walking away with some great unique football memorabilia from the gift shop. 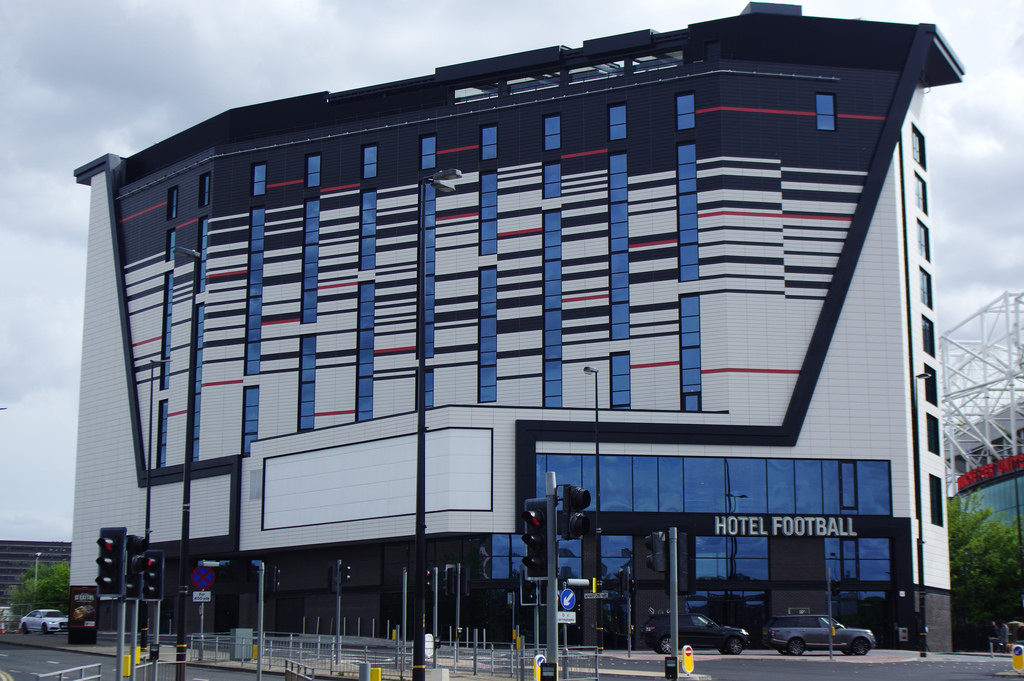 If you’re looking for somewhere special to stay during your time in Manchester, then Hotel Football is for you. Owned by Manchester United legends Gary Neville and Ryan Giggs, it’s located opposite Old Trafford, the stadium where they rose to the club stars they’re remembered as. The hotel is home to a sports bar, featuring specially brewed Cafe Football beer, a mixture of standard and executive rooms, and Heaven – a rooftop football pitch on the 12th floor of the hotel, with a retractable roof and stunning views of the city.

Usually referred to as Carrington, it replaced The Cliff as Manchester United’s training ground in 2000. The complex houses the Manchester United first team in the main building, fully equipped with running tracks, a gym, physiotherapy treatment rooms and much more to aid their training needs, as well as The Academy used for the training of the clubs’ under 21s. There is also an impressive new medical & sports science department on site, including a state-of-the-art hospital wing for the treatment of player injuries.

In December 2014, Manchester City moved from their training complex at Carrington to their new state-of-the-art facilities across the road from the Etihad Stadium. As part of a huge investment from the club’s owners, the training facilities are amongst some of the best in world football, and is now home to not just Manchester City’s first team players, but also their academy set up. Players of all age levels train at the CFA, while both City’s under-21 EDS squad and the club’s women’s team play matches at the academy stadium, affectionately known as the Minihad, with a capacity of 7000. Although the academy isn’t usually accessible to the public, for this summer only it’s being included on the Etihad Stadium tour, due to some of the usual parts of the stadium being off-limits during the summer’s concert season.

F.C. United of Manchester was founded in 2005 by supporters of Manchester United who were dissatisfied by their club being taken over by businessman Malcolm Glazer. The team currently play in the National League North, and have spent a majority of their time using Bury’s Gigg Lane as their home stadium. In 2015, they finally moved to their own newly constructed ground, Broadhurst Park, which opened in Newton Heath with a capacity of 4,400, at the cost of £6.3 million.

What better way to finish off your Manchester football tour than with a bite to eat? Here we’ve got one of Manchester’s most popular Italian restaurants, which just happens to be owned by Manchester United star Rio Ferdinand. With its luxury interiors and delicious food, Rosso is a celebrity hotspot, and has often been graced by the likes of other sports stars such as David Beckham, Wayne Rooney, Amir Khan and David Haye.

Want to see all of these places and more? Click here to view our selection of Manchester tours.